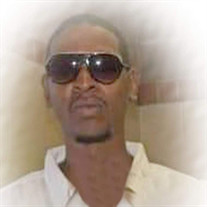 Mansfield: Tywan A. Clemons, 40, passed away Friday, November 30, 2018, at OhioHealth MedCentral Mansfield Hospital after an extended illness. Tywan was born June 28, 1978, in Mansfield, to the late Jerry Clemons and Zola Mae Clemons. He made... View Obituary & Service Information

The family of Tywan Antwan Clemons created this Life Tributes page to make it easy to share your memories.

Send flowers to the Clemons family.