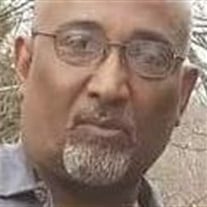 Columbus: Toney Steven Bluester, 61, passed away Monday, May 1, 2017, at Riverside Methodist Hospital after a brief illness. Toney was born February 22, 1956, in Dothan, Al, to the late Julius Bluester Jr. and Martha L. Rogers-Bluester. Served six years in the Army as a Supply Specialist, upon returning from the Army he worked at Ohio Brass for many of years. Toney leaves to cherish in his memory his mother, Martha L. Bluester, of Mansfield; fiance, the love of his life Violet Fuller, of Mansfield; three sisters, Emma (Jack) Chester, of Wooster, Terrie Bluester, of Mansfield, and Cassandra (Christopher) Preston, of Columbus; a brother, Timothy Bluester, of Amarillo, TX; two sons, Devon Robinson, of Dallas, TX, and Toney S. Bluester Jr., Browns Mill, NJ; a host of nieces, nephews, relatives and friends. Preceded in death by his father; brother, Melvin Bluester.; grandparents, Ethel M. Jenkins and Bessie Bluester. The services will be held Saturday, May 6, 2017, at 11 am, with one-hour prior calling at New Life Baptist Church, 538 Wayne St., Mansfield, Ohio, with Rev. Clarence Sanderfer officiating. The burial will be Monday, May 8, 2017, at 11 am, at Mansfield Cemetery Association, Inc., with the Richland County Veteran Burial Squad. The family has entrusted Small’s Funeral Services with the arrangements. www.smallsfuneralservices.org

The family of Toney Steven Bluester created this Life Tributes page to make it easy to share your memories.

Send flowers to the Bluester family.