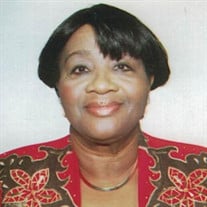 Greensboro, NC: Thelma Lee Jones 76, of Bladensburg Maryland, passed away from this life to life everlasting in Greensboro, North Carolina on August 26, 2018. Thelma was the second child born to the late Wilson Sr. and Ruby Lewis Jones, in Louise, Mississippi She moved to Mansfield, Ohio at the age of three with her parents. She was educated in the Mansfield City Schools system and graduated from the Crestline High School, Crestline, Ohio in 1960. After graduation she relocated to Columbus, Ohio where she became employed in the Mayor's Office. She was later drafted to go to work in Chicago, Illinois on a program instituted by President Lyndon Johnson. This job landed her in the United States Congress. The Congress sent her to College and she worked with five U. S. Presidents and their Staffs. She retired from the Congress after thirty-two years of service. Thelma was a member of the New Bethel Church of God in Christ in Washington D.C. She was the personal secretary of the late Bishop Sherman Howard of the D.C. Jurisdiction and secretary of the New Bethel Choir where she was an active member. She is survived by three sisters: Wilma {James} Watkins of Mansfield, Ohio, Velma {James} Tanks of Greensboro, North Carolina, Betty Jones of Columbus, Ohio; four brothers, Wilson Jr., Joseph, Frederic Jones of Columbus, Ohio, and William Earl {Helen} Jones of Decatur, Georgia; a host of nieces, nephews, relatives and friends. She was preceded in death by her parents; siblings, Ida Smith, Michael, Nancy and Ruby Lee Jones, grandparents, Cicero and Ida Jones, Andrew and Lillie Lewis. A private service for family and friends will be held on Friday, September 7, 2018, at 11:00 a.m., at Small's Funeral Services, 326 Park Ave. W., with Elder Thomas McLain officiating. The burial will be at Mansfield Memorial Park. The family has entrusted Small’s Funeral Services with the arrangements.

Greensboro, NC: Thelma Lee Jones 76, of Bladensburg Maryland, passed away from this life to life everlasting in Greensboro, North Carolina on August 26, 2018. Thelma was the second child born to the late Wilson Sr. and Ruby Lewis Jones, in... View Obituary & Service Information

The family of Thelma Lee Jones created this Life Tributes page to make it easy to share your memories.