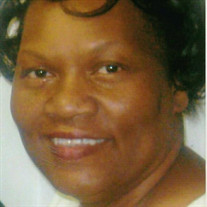 Sylvia L. Holmes (GG), 63, moved to heaven Saturday, June 20th, 2015, OhioHealth MedCentral after an extended illness. Born November 12th, 1951, Steens, Mississippi, to Bennie S. Williams Sr. and Lovie L. Williams. Sylvia moved to Mansfield in her early years and became a lifetime resident. She was a graduate of Malabar High School in 1970. She worked at White Westinghouse and then at Knight’s Inn as an office manager until her illness. She was a born again believer of Jesus Christ. She adored her grandchildren and great-grandchildren she loved her family. Sylvia was selfless, loving, kind and full of compassion. She was strong and courageous and full of faith. She enjoyed watching movies and entertaining friends and family at home. Sylvia is survived by her beloved husband, John A. Holmes, of Mansfield; devoted mother, Lovie L. Williams, Mansfield; a son, JaPaul Holmes, of Mansfield; a daughter, Johnna Holmes, of Mansfield; granddaughter, Julisa Holmes and great granddaughter, Arissa Holmes, both whom she raised as daughters; two sisters, Lucile Franklin and Patricia Small of Mansfield, OH; a brother, Clint (Fontaine) Williams, of Centerville, OH; a grandson, Shanden DeMoss, of Cleveland, OH; five granddaughters, Julisa Holmes, Jenise, Keira and Nicole DeMoss, of Mansfied, and Imani Holmes, of Mansfield; two great-granddaugthers, Arissa Holmes and Amiyah Durham, all of Mansfield; three great-grandsons, Lavonte and Kendrick Windham, both of Mansfield and Aiden DeMoss, of Columbus, Oh; a host of relatives and friends. She was preceded in death by her father Bennie Williams and brother, Bennie Williams Jr. Funeral services will be held at 11 a.m. Friday, June 26, 2015. Calling hours are one hour prior to services at Faith Temple COGIC, 504 Daisy St., with Rev. William Jordan officiating and Rev. Clarence Sanderfer the eulogist. The committal services will be held at the church. The family will be receiving relatives and friends at the home of the husband, John Holmes, 252 E. Arch St., from 4-8 until the day of the services. The family has entrusted Small Funeral Services with the arrangements. www.smallsfuneralservices.org

The family of Sylvia L Holmes created this Life Tributes page to make it easy to share your memories.

Send flowers to the Holmes family.