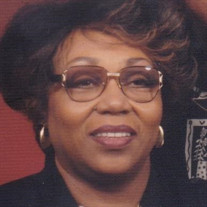 Ruth Juan Cannada went home to be with the Lord on Saturday, December 27, 2014, at Ohio Health MedCentral Mansfield after a brief illness. She was born to the union of Rumaine Reed and Gladys Effie (Lee) Reed on January 18, 1940, in Akron, Ohio. She attended elementary and junior high school in Akron but graduated from Mansfield Senior High School in 1958. In later years, she attended North Central Technical College at the Mansfield Branch. Her history of employment began in 1950 at the age of 10. She was a domestic worker and made $10 per week. Then at the age of 15, she worked at the coffee shop in Gray’s Drug Store. At the age of 17, she was hired at Independent Laundry. After that employment, she became a nurse aide at Mansfield General Hospital in the maternity/nursery department. She was hired in 1973 at Therm-O-Disc and retired from there in 1988. She was employed at Sprint Telephone Company for 15 years and then retired. She then opened a state-licensed childcare facility that was in operation from 2008 to the present. Juan (as most knew her) answered the call to salvation with Christ early in life. She was a member of Bethel Apostolic Temple (P.A.W.) in Akron before moving to Mansfield in 1954. Then the family became members of the Apostolic Church of Christ (P.A.W.) under the pastorate of Bishop C. R. Lee. She and her husband (Calvin) joined St. John’s C.O.G.I.C. (currently Oasis of Love C.O.G.I.C.) under the late Bishop Walter Earl Jordan. She has been a frequent visitor at Mansfield First Assembly of God, Rev. Thomas Blair, Pastor, with her daughter Condrea and the children. Juan’s passion was inviting people to her beautiful home, making them comfortable, and preparing the most delicious foods ever. She gave frequent invitations because she loved being with family members, grandchildren, great grandchildren, and friends. She would give up sleeping in her room and would sleep on the sofa or on the floor in the family room with whoever was spending the night. She would create a reason to get together to have fun, food, and Jone’s potato chips. She leaves to mourn her passing her husband, Calvin Maurice Cannada, of 39 years; sons, Charles Dale (Renee’-deceased) Reuer and Gary Eugene(La Shawn) Reuer; daughters , Cynthia Diane (Dannie) Lloyd and Condrea Webber, all of Mansfield; Darnella (a.k.a. Tiny) Cannada, Angela(Adell) Lawrence, and Carol(Michael) Stewart, all of Dayton; two brothers, Charles Lavelle(Carolyn) Reed, of Mansfield; Gerald Richard Reed Akron; four sisters: Marianne (Theoplis) Edwards, of Akron, Elaine(La Baugh) Stansbury, of Pittsburgh, PA, Alyce (Levi) Kennedy and Kay Celestine Reed, both of Chicago, IL; 26 grandchildren, and 50 great grandchildren all of the Mansfield and Dayton; a host of nieces, nephews, cousins, and friends. She was preceded in death by her father (1958) and her mother (1962); sisters, Annette E. Fay (1981) and Asia Powers (a.k.a. Dolores – 2004); her son, Andre’ Brooks (1997); granddaughter, Ta-Mia’ Joi and grandson DeAngelo. The services will be held Friday, January 2, 2015, 12:00 o’clock noon, with one hour prior calling at Oasis of Love, 190 Chester Ave., with Dr. Walter E. Jordan, officiating. The burial will follow at Mansfield Cemetery. The family will be receiving relatives and friends at their home, 2275 Kentwood Dr., Mansfield, nightly, from 4-8 until the day of the services

Ruth Juan Cannada went home to be with the Lord on Saturday, December 27, 2014, at Ohio Health MedCentral Mansfield after a brief illness. She was born to the union of Rumaine Reed and Gladys Effie (Lee) Reed on January 18, 1940, in Akron,... View Obituary & Service Information

The family of Mrs. Ruth J. Cannada created this Life Tributes page to make it easy to share your memories.

Ruth Juan Cannada went home to be with the Lord on Saturday,...

Send flowers to the Cannada family.