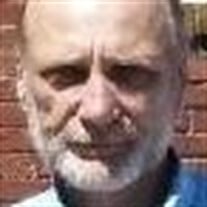 Mansfield: Robert Jeffrey Reed, 59, passed away Sunday, March 25, 2018, at OhioHealth MedCentral after a brief illness. He was surrounded by his loving family and friends. Robert was born May 11, 1958, in Mansfield, to the late William Samuel Reed and Blanche Lemaster Jeff worked at Bunting Bearings for 21 years. He enjoyed the outdoors and spending time with his family, especially his grandchildren. One of his favorite things to do was to go to Coney Island, with his youngest grandchild, Ryan. Jeff was very witty with a great sense of humor, he always had a story to tell. He had a heart of gold and his door was always open to his family and friends. On his free time, he enjoyed watching westerns and scrapping metal. Although, he is no longer with us we are grateful for the time we had to spend with him and the memories that were created. Jeff is survived by his lifelong companion and mother of his two children, Jane Murphy; three children, Jeremy Ellis, Ryan Reed and Abigail Reed; three grandchildren, Kaylee Stone, Jayvion Jones and Ryan "Chunk" Reed; three sisters, Judy Fields, Joann Hunt and Kathy Myers; a host of nieces, nephews, whom he cared about deeply. He was preceded in death by his parents, sister, Janet Norris; two brothers, Bill and David Reed. A celebration of life will be held on Saturday April 7th, 2018, at the Powerhouse Worship Center, at 3:30 p.m., 458 Woodland Ave., Mansfield, with David Howell officiating. The family has entrusted Small’s Funeral Services with the arrangements.

Mansfield: Robert Jeffrey Reed, 59, passed away Sunday, March 25, 2018, at OhioHealth MedCentral after a brief illness. He was surrounded by his loving family and friends. Robert was born May 11, 1958, in Mansfield, to the late William Samuel... View Obituary & Service Information

The family of Robert Jeffrey Reed created this Life Tributes page to make it easy to share your memories.

Send flowers to the Reed family.