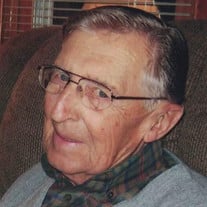 On Tuesday, October 16, 2018, Robert (Bob) Harley Davis, loving husband, father and grandfather, passed away in his home at the age of 95. Robert was born on July 23, 1923, in Toledo, Ohio to the late George and Grace (Nusser) Davis. After returning from Europe where he served with the Army in WWII, Robert fell in love with a beautiful young lady, Marguerite (Marge) Pockett. They married on July 23, 1949 and recently celebrated their 69th anniversary. Early in their marriage, Bob and Marge relocated to Lima, Ohio, where they welcomed the arrival of their three daughters, Karen, Kathleen and Kristine. As a longtime CenturyLink employee, Robert and his family were transferred to Mansfield, Ohio in 1968, where they were active members of St. Timothy Lutheran Church for many of years. Always ready for new adventures and challenges, Bob’s hobbies included fishing, sailing, cross-country skiing and biking. He was a talented stained-glass artist. After retirement, Bob and Marge spent many happy summers at their lake cabin in the Upper Peninsula of Michigan. The pursuit of sunshine and warm weather led them to Ocala, Fl in 1989. As members of Our Savior Lutheran Church, Bob enjoyed volunteering in various ministries. His beautiful stained-glass artwork graces each window of the sanctuary. Declining health necessitated a return to Mansfield four years ago, where they have made their home at The Waterford. Being nearby to family once again was a tremendous blessing to all. In addition to his parents, Bob was preceded in death by his daughters, Kathleen in 1966 and Karen in 2015. What a glorious heavenly reunion that must have been. Bob’s survivors include his loving wife Marge, daughter Kristine (George) Warne of Mansfield, son-in-law Dr. Barney Davis of Phoenix, AZ and brother Eugene (Carol) Davis of Indiana; grandchildren Lyra (Jason) Fenner, Bryan Warne (Ashley Carroll), Caitlin (Zach) Moore and Lela (Paul) Beam; great-grandchildren Jonah and William Fenner, Haven, Jude and Knox Moore, Madelynn Meads and Sophie Sterling; and great-great-grandson Dylan Patrick. Many happy memories were made with family friend Mary Kay Kunz, who was more like a daughter. Robert’s family would like to thank the many wonderful caregivers at Hospice of NCO and The Waterford at Mansfield. Memorial contributions may be made to www.godspeedresources.org, a missionary care ministry founded by their daughter Karen and husband Barney. A memorial service will be held at a later date. The family has entrusted Small’s Funeral Services with the arrangements.

On Tuesday, October 16, 2018, Robert (Bob) Harley Davis, loving husband, father and grandfather, passed away in his home at the age of 95. Robert was born on July 23, 1923, in Toledo, Ohio to the late George and Grace (Nusser) Davis. After... View Obituary & Service Information

The family of Robert H. Davis created this Life Tributes page to make it easy to share your memories.