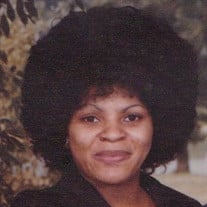 Hartford Ct.: Norma Jean Hamner, 63, passed away Saturday, March 7, 2015, at St. Francis Hospital Hartford Ct. after an extended illness. Norma was born September 18, 1951, in Perry’s Point MS, to Oddie Will Petty and Mattie Lee Owens-Tucker. She lived most of her life in Mansfield; she moved to New Britain, CT, in July of 1998. Norma graduated from Malabar High School and attended Wright State University. Norma was a cheerleader for Malabar and achieved many awards. She worked at Bank One and Richland Bank for many of years. She was a member of Shiloh Baptist Church; where she was a choir member. Norma Jean leaves to cherish in her memory a devoted mother, Mattie Owens-Tucker, of Mansfield; a son, Eric Hamner, of Columbus; a daughter, LaSonya (Kevin) Collins, Windsor, Ct; six grandchildren; two brother, Terry Petty, of Mansfield and Joe Michael (Marian) Smith, of Augusta, Ga; a stepbrother, Eddie Smith, of Tennessee; a host of nephews, nieces, relatives and friends. She was preceded in death by her father, Oddie W. Petty; a brother, Willie Earl Petty; stepfathers, Jim M. Smith and Rev. James Tucker. The services will be held Friday, March 13, 2015, at 12 noon, with one hour prior calling at Shiloh Baptist Church, 130 East 2nd St., with Bishop Williams Morris officiating. The burial will follow at Mansfield Cemetery. The family has entrusted Small’s Funeral Services with the arrangements. www.smallsfuneralservices.org

The family of Norma Jean Hamner created this Life Tributes page to make it easy to share your memories.

Send flowers to the Hamner family.