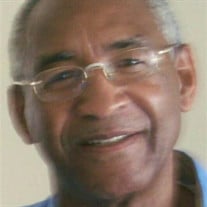 Mansfield: Nathaniel Moore Sr., 83, went home to be with the Lord on Saturday, August 1, 2015, at home after a brief illness. Nathaniel Moore, Sr. was born Thursday, May 5, 1932, to the late Rev. Garnett Moore, Sr. and Shellie Mae (Daniels) Moore in Crawfordville, Georgia. Nate lived in Mansfield for the past 64 years. He became employed with General Motors as a Die Setter and retired in 1993 after 35 ½ years of service. Nate became a member of the Shiloh Missionary Baptist Church where he met and married Clara L. Brown with whom they celebrated 62 years of marriage on July 30, 2015. Nate loved to sing! In his early years he was a member of the Heavenly Gospel Singers and sung with James Torrence, and James English they sang every Sunday morning on WMAN. He was very active in his church where he was a member of the Brotherhood, various coral groups, trustee board, and the transportation ministry and later ordained as a Deacon. Nate never met a stranger. He always tried to lend a helping hand, whether giving someone a ride or taking some body to buy new tires. He enjoyed plowing snow and would often plow stranger’s driveways and intentionally leave before they could pay him, especially the elderly. Deacon Nathaniel Moore LOVED his wife and children, his family and his church. He was devoted to caring for his wife for the past seven years. All these years he continued to love and to live out what a marriage covenant is for his children's children and generations to come. As he would say and quote “Heeeyy, this is what I’m supposed to do! I said, for better or worse, richer or poorer, sickness and in health, because that could be me!" Whether you referred to him as Nate, Daddy, Grandpa, Papa, Uncle Nate, Brother Nate, Big Nate, Mr. Moore, Deacon Moore, Moore or Doctor he will truly be missed! He is survived by his wife, Clara (Brown) Moore, of Mansfield; three children, LaVerne (Sylvester) Wellington, Nathaniel Moore, Jr., of Mansfield and Teena (Michael) Gamble, of Atlanta, GA; a special son, Ronald Taylor, of Brownsville, TN; Six Godchildren, Theresa (Daphne) Thompkins , Joyce Torrence-Ali, Rayna Hutcherson, Traci Mask, Aubreyanna Johnson, and Delmar Brown; a very special niece, Deloris (Chris) Brown; ten grandchildren and fifteen great-grandchildren; one brother, Charlie (Eddie) Moore, of Springfield Garden, NY; two sisters-n-law, Dallas Moore, of Union Point, GA,; Beulah Moore, of Cincinnati, OH; a brother in law , Rev. William Ferrell, Sr., of Washington, GA; and a host of nieces and nephews. In addition to his parents Nathaniel was preceded in death by one daughter, Traci Moore; two sisters, Minnie McWhorter and Edna Ferrell; four brothers, Garnett Moore, Sr., Lynwood Moore, Grady Moore, Sr., and James Moore. His children would like to acknowledge a special family friend Mrs. Mary Patton, of VNA Special Services. Thank you for all that you continue to do. Dad totally trusted your wonderful care, support, love, special attention and time you gave to Mom. You allowed Dad the “breaks” he needed to be “Daddy” and we will always love you for that! Thank you for embracing us as family and not just a client! The services will be held Saturday, August 8, 2015, at 11 a.m., with one hour prior calling at Shiloh Baptist Church, 130 East 2nd St., with Bishop William Morris Jr., officiating. The burial will be Monday, August 10, 2015, at 10 a.m., at Mansfield Cemetery. The family has entrusted Small’s Funeral Services with the arrangements. www.smallsfuneralservices.org

Mansfield: Nathaniel Moore Sr., 83, went home to be with the Lord on Saturday, August 1, 2015, at home after a brief illness. Nathaniel Moore, Sr. was born Thursday, May 5, 1932, to the late Rev. Garnett Moore, Sr. and Shellie Mae (Daniels)... View Obituary & Service Information

The family of Nathaniel Moore Sr. created this Life Tributes page to make it easy to share your memories.

Send flowers to the Moore family.