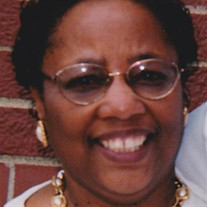 Mansfield: Nancy Lou Jones, went home to be with the Lord on Monday, June 20,2016 at Mount Carmel Saint Ann’s Hospital, Westerville, Ohio. She was born the sixth child to the late Wilson Jones Sr. and Ruby Lewis- Jones, March 2,1948, in Mansfield, Ohio. Nancy was a member of the Greater St. John Church of God in Christ, Oasis of Love, all of her life. At the age of 14 her parents allowed her to travel with the late Bishop Walter Jordan and Lady Shirley Jordan to Memphis, Tennessee to attend the Holy Convocation of the National Churches of God in Christ. From that day forward, she served on numerous Auxiliaries during her Christian walk. She was a humanitarian. Her greatest passion was visiting the sick and shut-in at hospitals and nursing homes and taking food and clothing to the needy. Nancy was educated in the Crestline Schools and Mansfield City Schools graduating from Malabar High School in 1966. She received an Associate Degree in Accounting from Mansfield Business College. She was a trained and licensed Cosmetologist from the Ohio State School of Cosmetology in Columbus and a trained and certified teacher of the Ohio Heartland Head Start. Her very first job was a teacher's aide at Springmill Elementary School, Mansfield in the 1970's. She was employed for 25 years at Therm-O-Disc and 20 years as a stylist at Wilma's Cosmetique Hair Salon. It was there that she opened "Nancy's Gospel Music Store". Nancy leaves to cherish her memories four sisters, Wilma {James} Watkins, of Mansfield, Ohio, Thelma Jones, of Bladensburg, Maryland, Velma {James} Tanks, of Greensboro, North Carolina, and Betty Jones, of Columbus, Ohio; four brothers, Wilson Jr. {Edwina} Jones, Joseph Jones, Frederick Jones, all of Columbus, Ohio, and William Earl {Helen} Jones, Decatur, Georgia. She was preceded in death by her parents, grandparents, Cicero {lda}Jones and Andrew Lillie} Lewis; two sisters, Ruby Lee Jones and lda Jones Smith; one brother, Michael Stanley Jones. The family will receive friends at the home of her sister Wilma {James} Watkins, 193 Home Ave., from 5-8 P.M. Fri. Sat. Sun. until day of service. Service will be held Monday, June 27, 2016, at 11 a.m., with one-hour prior calling at Oasis of Love Church, 190 Chester Ave., with Dr. Walter E. Jordan officiating. The burial will follow at Mansfield Memorial Park. The family has entrusted Small’s Funeral Services with the arrangements.

The family of Nancy Lou Jones created this Life Tributes page to make it easy to share your memories.

Mansfield: Nancy Lou Jones, went home to be with the Lord on...