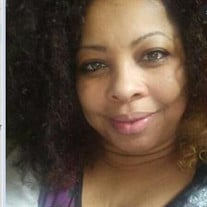 Akron, Melinda Kay Pointer, 47, passed away Tuesday, July 28, 2020, unexpectedly. She was born November 5, 1972, in Mansfield, Ohio, to Paris Butler-Jones and Frank Pointer III. Melinda attended Madison Comprehensive High School, before attending Kent State University and later receiving her degree from North Coast Medical Training Academy, in Kent, Ohio. Melinda received her Ministry Certificate through the House of the Lord Logos program. She was Self-employed and most recently took interest in fashion design alongside her daughter Princess. Melinda was a loving mother who had a fearless heart, a free spirit, with the biggest smile and personality to match. She made you laugh within the first few moments of being with her, that was just one of her many gifts. She is survived by her four children, Princess Pointer , Alexandria Jones, both of Akron, OH, Alex Davis of Columbus, OH, and Ceanne Wright of Mansfield, OH; loving mother, Paris (Garry) Jones, of Murfreesboro TN, loving father, Frank Pointer II, of Mansfield Ohio; grandchildren, St. Michael Walker, Empress Ra –Raziel, and King Reese Marcellous Livingston, all of Akron, Ohio; Sisters, Clarissa (Parris) Campbell, of Akron, Ohio, Brandi Jones, of Murfreesboro, TN, Fran Chasity Pointer, of Mansfield, OH, Stacey Kilpatrick, of Mansfield, Ohio; Brothers, James Bonds Jr., Jamon Bonds, both of Milan, TN, Frank Pointer IV, Andrew Hawthorne and Nathan McFarland Sr., all of Mansfield, OH; and other siblings; special daughter, sister, friend, Joshua Walker, of Copley, OH; a host of loving aunts uncles, nieces, nephews, cousins, and friends. Melinda was preceded in death by her maternal grandparents, Clara and Ed Butler Jr., paternal grandparents, Katie Ruth and Frank Pointer Jr. Due to the current COVID-19 pandemic restrictions the family has arranged an intimate calling hours on Sunday, August 2, 2020, where they will be receiving family and close friends, from 2:00 pm -5:00pm, at Small’s Funeral Services, 326 Park Avenue West, Mansfield, Ohio 44906. The family has requested that anyone attending to bring a 1$ bill with a special note, message, or memory written on it to be placed in the casket with Melinda to cherished for eternity. The family would like to thank those who have expressed and extended emotional support for Melinda during these times. Acknowledgements can be sent to the funeral home or 94 Flint St. Mansfield, Ohio. The family has entrusted Small’s Funeral Services with the arrangements As a reminder please bring a mask as you will not be allowed to enter without it. Proverbs 13:22 “The wealth of the wicked is laid up for the Just”

The family of Melinda Kay Pointer created this Life Tributes page to make it easy to share your memories.

Send flowers to the Pointer family.