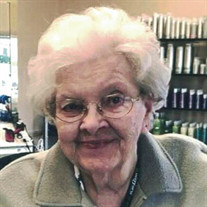 Mansfield: Marguerite D. Davis, 97, passed away Friday, November 29, 2019, at OhioHealth Mansfield Hospital after a short illness. Marge was born on December 16, 1921, in Toledo, Ohio, to Albert and Grace (Logee) Pockett. As one of ten children, her nurturing spirit and strong work ethic were developed at an early age. Losing both parents as a young teenager instilled an even deeper love of family for her. Toward the end of WWII, a dashing young man in uniform captured her heart on their first blind date. On July 23, 1949, Marge and Robert H. Davis were united in marriage, a union that lasted over 69 years until his passing Oct 16, 2018. Three daughters, Karen, Kathy and Kris were added to the family over the next several years, bringing Marge into the life she loved as an unparalleled wife and mother. She was simply amazing in her ability to provide a lovely home for her family, along with some of the best homecooked meals ever. Her gift of hospitality ensured that the Davis home was always filled with friends, family, love and laughter. After relocating to Mansfield in 1968, she was an active member of St. Timothy Lutheran Church for many years. Following her husband’s retirement, several happy summers were spent at their lake cabin in the Upper Peninsula of Michigan before moving to Ocala, FL, in 1989. Marge enjoyed many years of volunteerism in her church, Our Savior Lutheran, as well as her community. Her giving spirit was a blessing to everyone she met. The Waterford of Mansfield was the place Marge called home for the past 5 years. She was so contented there and happy to be close again to family. In addition to her parents and husband, Marge was preceded in death by her daughters, Kathleen in 1966 and Karen in 2015. What a glorious heavenly reunion that must have been. Marge’s survivors include her daughter, Kristine (George) Warne, of Mansfield; son-in-law, Dr. Barney Davis, of Phoenix, AZ; brother-in-law, Eugene (Carol) Davis, of Lafayette, IN; grandchildren, Lyra (Jason) Fenner, Bryan Warne (Fiancée Ashley Carroll), Caitlin (Zach) Moore and Lela (Paul) Beam; great-great grandchildren, Jonah and William Fenner, Haven, Jude and Knox Moore, Madelynn Meads and Sophie Sterling; and great-great grandson, Dylan Patrick. The family would like to thank the many wonderful caregivers at The Waterford, OhioHealth Mansfield and Crystal Care Rehab Center. Your loving care of Mom was greatly appreciated. A memorial service will be held later. The family has entrusted Small’s Funeral Services with the arrangements.

Mansfield: Marguerite D. Davis, 97, passed away Friday, November 29, 2019, at OhioHealth Mansfield Hospital after a short illness. Marge was born on December 16, 1921, in Toledo, Ohio, to Albert and Grace (Logee) Pockett. As one of ten children,... View Obituary & Service Information

The family of Marguerite Doris Davis created this Life Tributes page to make it easy to share your memories.