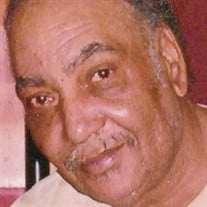 Mansfield: Lawrence Bobo, 73, passed away Friday, August 14, 2015, at OhioHealth MedCentral after a brief illness. Lawrence was born January 8, 1942, in Columbus, MS, to the late Add Swoope and Willie Bobo-Swoope. He lived in Mansfield for... View Obituary & Service Information

The family of Lawrence Bobo created this Life Tributes page to make it easy to share your memories.

Send flowers to the Bobo family.