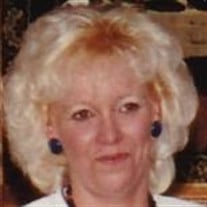 Mansfield – Jerilyn Bea Bradley, 59, Wednesday, December 31, 2014, Ohio Health MedCentral after a brief illness. Jerilyn was born October 13, 1955, in Mansfield, to the late Clayton Long and Carolyn McCurdy- Cline. She graduated from Lucas High School and was employed at Cracker Barrel for eighteen years. She leaves to cherish in her memory her husband, Wilbert Bradley, of 35 years, two daughters, Erica (Bruce) King, of Lucas, and Alicia Disbennett, of Cincinnati; two sons, Duane Bradley, of Columbus, and Jermaine (Treva) Bradley, of Mansfield; nine grandchildren; two great-grandchildren; a host of relatives and friends. She was preceded in death by her parents. The calling hours will be January 6, 2015, at 11 to 1 p.m., at Small’s Funeral Services, 326 Park Ave. W., Mansfield. The family has entrusted Small’s Funeral Services with the arrangements. www.smallsfuneralservices.org

The family of Mrs. Jerilyn Bea Bradley created this Life Tributes page to make it easy to share your memories.

Send flowers to the Bradley family.