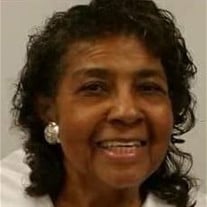 Ineatha Thompson Holmes, 79, passed away Wednesday, January 3, 2018, at Riverside Methodist Hospital after a short illness. Born on December 16, 1938 to the late Percy Thompson and Lucille McKinney, Ineatha was one of nine children. She grew up in Louisville, Kentucky and received her education through the Kentucky public school system where she graduated from Central High School in Louisville. Upon graduation from high school, Ineatha attended Simmons University studying accounting and being employed at the same establishment. It was during her formative years at Ebeneezer Baptist Church where she gave her heart to the Lord and was a member, that she would eventually meet the love of her life, Joseph E. Holmes, Jr., who would later become her husband. On November 24, 1961, in Louisville, Ineatha traded in her “Miss” to become “Mrs.” and was joined to Joseph in marriage. It was then that she left Louisville and moved to Mansfield, Ohio. Ineatha’s transition to Mansfield offered her many opportunities to make it her home. She worked honing her skills in several jobs from census gathering to working at a local fish market. The most pleasurable honor for Ineatha was that of being mother to her five children. However, she also served the youth and the community as a Brownie Leader; Girl Scout Leader; Volleyball coach; President of Mother’s Club at various schools; Mansfield Senior High Tygers Booster Club member; Cub Scout Den Leader; and, Band Booster. Her passion was toward the youth and making the community around her better. She also knew that involvement in her church would set the spiritual foundation vital to her family’s growth. After becoming a member of Temple of Faith Church of God in Christ, now known as Maddox Memorial Church of God in Christ, Ineatha, again, served her Lord and church community as Sunshine Band Leader (affectionately referred to as “Mother Sunshine”) at both Temple of Faith and Maddox Memorial; YWCC President; and one of her most treasured titles was that of being “Church Mother” at Maddox Memorial. She loved serving the Lord and others. God called home His beloved and faithful servant on January 3, 2018. As she touched the lives of many of this community, she will be remembered for her sweet spirit, kind touch, godly guidance and wisdom. Her life will be remembered, and memories cherished by her two sons, Joseph (Trest) Holmes III of Mansfield, OH; and, Russell (Cindy) Holmes of Lake Worth, FL.; two daughters, Gay Holmes-Carter of Akron, OH; and, Joy (Gary) Harris of Fishers, IN; one sister, Mattie Thompson of Louisville, KY; and, three sisters-in-law, Dorothy Carr of Mansfield, OH.; Floetta Thompson of Louisville, KY; and, Anne Thompson of Gary, IN. Affectionately known as “MaMa,” her greatest satisfaction was spending time and making loving memories with her 13 grandchildren: Whitney Holmes, Ineatha Holmes, Michael Carter Jr., LaKeya Holmes, William Carter, Russell (CJ) Holmes Jr., Courtney Carter, Morgan Holmes, Gary Harris Jr., Jasmine Holmes, Kayla Carter, Cameron Harris, and Trey Harris, a host of nieces, nephews and friends. Ineatha was preceded in death by her loving husband of 47 years, Joseph Holmes, Jr.; son, Ronald Holmes; parents, Percy and Lucille Thompson; brothers: Theodore Thompson; Leo Thompson; Gostee Thompson; David Thompson; Charles Albert Thompson; Percy Thompson, Jr.; and, Eugene Thompson. The calling hours will be Friday, January 12, 2018, 6:00 – 8:00 p.m., at Maddox Memorial COGIC, 1148 Walker Lake Rd. A final viewing will take place on Saturday, January 13, 2018 from 9:00 - 9:45 a.m. with the funeral service beginning promptly at 10:00 a.m. at Maddox Memorial COGIC, 1148 Walker Lake Rd., Pastor Aaron Williams Jr. officiating. The burial will follow at Mansfield Memorial Park. The family has entrusted Small’s Funeral Services with the arrangements

Ineatha Thompson Holmes, 79, passed away Wednesday, January 3, 2018, at Riverside Methodist Hospital after a short illness. Born on December 16, 1938 to the late Percy Thompson and Lucille McKinney, Ineatha was one of nine children. She grew... View Obituary & Service Information

The family of Ineatha T. Holmes created this Life Tributes page to make it easy to share your memories.

Send flowers to the Holmes family.