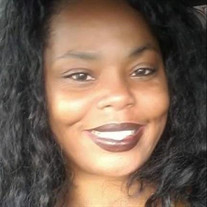 Mansfield: Geneva Mary Emily France, 36, passed away Wednesday, January 2, 2019, at OhioHealth MedCentral Mansfield Hospital. Geneva was born November 19, 1984 to Katie Mae Davis and Leon Henry France. She was a life long resident of Mansfield, Ohio. Geneva was a wild and happy soul with more than a back bone. Even as a child she was able to push through more than some of us today. She attended Mansfield City Schools as well as being a licensed , STNA. Throughout her teenage years, Joyce Purdue, was more than a mother figure to her. They honestly adored each other. Geneva was the life of every party and when some things weren't about her she found a way gain attention. To know her was to love her. However, what mattered most to her was her family but her children were most important. She is survived by her 3 daughters and a son, Kyelia Smith and Kateria Smith (Columbus), Leelashay France and Jon Jefferson Jr (Mansfield). Her mother and father Katie Mae Davis and Leon H. France both of Mansfield. Sisters Angela France and Alisa Kelly both of Mansfield; Ranada France and Natasha Wrathey of Akron; Brothers, Leon France Jr, Phillip France, Eddie France,Calvin France, and Felix McClinton,  all of Mansfield. A special cousin Jameelah France and a Great friend LaWesco Ballard of Mansfield. A host of nieces, nephews, aunts uncles, cousins and friends. Geneva was proceeded in death by her maternal and paternal grandparents. A favorite uncle Lee Edward France, and several more aunts and uncles. The services will be held Thursday, January 10, 2018, at 11 a.m., with one-hour prior calling at Small’s Funeral Services, 326 Park Ave. W., with Bishop Sylvester Ginn officiating. The committal service will follow the services. The family has entrusted Small’s Funeral Services with the arrangements.

The family of Geneva Mary Emily France created this Life Tributes page to make it easy to share your memories.

Send flowers to the France family.