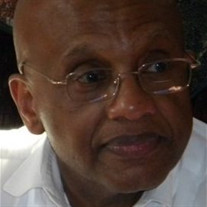 Mansfield-Frank L. Scott Sr., 72, of Mansfield, passed away on Thursday May 22, 2014, at the Hospice of North Central Ohio, in Ashland, Ohio. He was born on June 16, 1941 in Greenville, S.C., and moved to Mansfield, with his family, at age 5. He was the son of Ulysses G. Scott and Katherine Scott Smith. Frank was raised and loved by his grandmother, Goldie Scott Cannada, whom he called, "Momma". He was also loved by his two stepmothers, Virginia Swan Scott and Elnora Glover Scott. Frank graduated from Mansfield Senior High School, and was drafted into the United States Army in 1964. He spent two years in Vietnam, and was honorably discharged in 1966. On June 8, 1968, he married his sister's best friend, and the love of his life, Corrine Emerson. He worked for several companies during his lifetime, and retired from AK Steel. But, the place that he loved working the best was at OhioHealth MedCentral Hospital, as a Greeter. Frank had to leave his beloved job, in 2011, due to his illness. He would say, from time to time, that this had been the only job, in his entire life that he would have worked for free. Frank was a member of the United Steelworkers of America, Local 169, and the VFW Burial Detail (Veterans of Foreign Wars). He was also an usher and member of The Oasis of Love Church. A few of his hobbies included, fishing, bowling, traveling, football, mowing his 3-acres of land, and watching the History, Cooking, and Animal Channels. Frank was a very good cook, and only once, allowed his wife, Corrine, to bake the Thanksgiving turkey...which of course, was not as good as his. He had a love for Archway cookies, and apple pie with vanilla ice cream. Aaron Neville and Toni Braxton, were a few of his favorite singers, and It's a Wonderful Life, The Fighting Sullivans, Tarzan, and Creature from the Black Lagoon were some of his favorite movies. One of his most exciting times, was when his wife's name was drawn, for tickets, to the Antiques Roadshow, in Atlanta, Ga., and the day before leaving, her name was drawn, again, at the annual Hospice gala, winning her...$2500. Frank was an easy going, kind, generous, loving, respectful, and hardworking man. He loved our Lord, his family, and friends. He leaves to cherish his memory his wife, of almost 46 years, Corrine Emerson Scott, of Mansfield; son, Frank (Brenda) L. Scott Jr., of Rockledge, FL; a daughter, Corrine (Arteus) Scott-Smith, of Marietta, GA; seven grandchildren, Jade (Matthew) Scott-McKinley, of Athens Ohio, Aymara Scott, of Mt. Vernon, Ohio, Chloe (Michael) Scott-Hysell, of Mt. Vernon, Ohio, Janera and Jamiyah Smith, of Marietta, GA and Frank III and Dale Scott, of Rockledge, Fl.; seven sisters, Annie P. Mack, of Woodbridge, VA, Ann L. (Leon) Jefferson, of Mansfield, Brenda K. Scott, of Mansfield, Delores J. Scott, of Dublin, Ohio, Mary A. Bridges, of Mansfield, Cornelia Norris, and Diane Gordon, of Greenville, S.C.; one brother, William Henry Scott, of Mansfield; an uncle, Calvin (Juan) Cannada; of Mansfield; an aunt, Julia Scott, of Mansfield; stepsister, Dorothy (Roger) Reuer, of Mansfield; two sister-n-laws, Naoko Scott, Atlanta, GA and Mary Smith, of Mansfield; one brother-n-law, Lee M. Bridges; special friend, Michael Phelps; and a host of loving cousins, nieces, nephews, and friends. Frank was preceded in death by his parents, grandmother/momma; stepmothers; brothers, Darnel, Willie J. and Sam Smith; two sisters, Annie R. Irby and Conuse Alice Scott-Haley; mother-n-law, Dorothy J. Emerson; sister-n-law, Gwyndolyn Emerson; and the beloved family dog, Nikki. Memorial Services will be held on Saturday, May 31, 2014, at the Oasis of Love Church, 190 Chester Ave., Mansfield, Ohio, at 1:30 p.m., with Dr. Walter E. Jordan officiating. Full military honors will be conducted by The Richland Joint Military Burial Detail. The family will be receiving relatives and friends at the home of the sister Ann and Leon Jefferson, 1129 Cobblefield Dr., Mansfield, Ohio, beginning Monday, until the day of services, from 4-7 p.m. In lieu of flowers, the family has asked that donations be made to: The Mesothelioma Applied Research Foundation, 1317 King St., Alexandria, VA, 22314, 877-363-6376. The family has entrusted Small's Funeral Services with the arrangements.

Mansfield-Frank L. Scott Sr., 72, of Mansfield, passed away on Thursday May 22, 2014, at the Hospice of North Central Ohio, in Ashland, Ohio. He was born on June 16, 1941 in Greenville, S.C., and moved to Mansfield, with his family, at age... View Obituary & Service Information

The family of Frank Lee Scott Sr. created this Life Tributes page to make it easy to share your memories.

Send flowers to the Scott family.