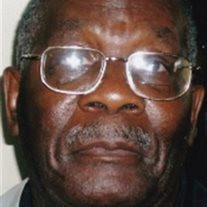 Mansfield: Esker Jordan, 84, was called home to be with the lord on Monday, January 27, 2014, at MedCentral/Mansfield Hospital with his family at his side. Esker was born February 1, 1928, in Andalusia, AL to the late Ellis and Julia Bell Jordan. He joined Mt. Herman Baptist Church under the leadership of Rev. Jackson. He served under many titles in the church including janitor, landscaper, Sunday school teacher and Trustee. He attended Mansfield Senior High School, where he excelled as a scholar and co-captain of the football team that defeated Massillon High School in 1950. After graduating in 1951 Esker then attended Kent State University on a football scholarship, majoring in mathematics. After leaving college he enlisted in the U.S. Army where he served in the Korean Conflict as a military police and was honorably discharged after two years of service. Esker was employed at the Ohio Brass where he became a foreman. His interests included watching football, basketball and baseball. He was an avid fisherman and loved gardening, landscaping and charming people with his infectious smile and personality, usually greeting ladies with “Hey Mama”. Esker is survived by his wife Lillie Jordan, who was his caretaker; three daughters, Glynis Anne Haney, Kim LeQueta Green and Jenifer La’Tasha Jordan, all of Mansfield; a son, Scott Anthony Jordan, of Mansfield: a sister, Electra Feagin, of Mansfield: 15 grandchildren, 29 great-grandchildren and a host of nieces, nephews, cousins, colleagues and friends. He was preceded in death by his parents, sister, Ada Adley. The services will be held Monday, February 3, 2014, at 12 noon and the calling hours will be Sunday, February 2, 2014, from 4 to 6 pm at Mt Hermon Baptist Church; with the Rev. Dr. Clinton Hearns officiating. The burial will follow at Mansfield Cemetery with full military honors. The family will be receiving relatives and friends at 344 Wood St., until the day of the services. The family has entrusted Small’s Funeral Services with the arrangements. www.smallsfuneralservices.org

Mansfield: Esker Jordan, 84, was called home to be with the lord on Monday, January 27, 2014, at MedCentral/Mansfield Hospital with his family at his side. Esker was born February 1, 1928, in Andalusia, AL to the late Ellis and Julia Bell Jordan. He... View Obituary & Service Information

The family of Esker Jordan created this Life Tributes page to make it easy to share your memories.

Mansfield: Esker Jordan, 84, was called home to be with the lord...

Send flowers to the Jordan family.