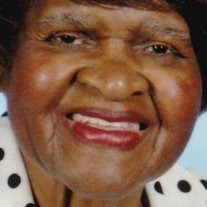 Mansfield – Era Jackson, 88, passed away Tuesday, February 25, 2014, at Hospice of North Central Ohio, Ashland after an extended illness. Era was born March 26, 1925, Lilburn, GA, to the late Joel Ramey and Everline (Meredith) Ramey. She worked at Independence Towels for many of years. She was a loving mother and wife of 40 years. Era was very kind and friendly, and had a smile that would light up a room. She enjoyed life and loved to have fun. Era leaves in her memory her devoted daughter, Nadine Jackson, of Mansfield; three grandsons, Damian Jackson, of Akron, Andre (Jackie) Jordan, of Columbus, and Derek Jackson, of Mansfield; three great-granddaughters, Shayla Jackson, of Akron, Jazymn Jordan, of Columbus, and Mia Edmunds, of Mansfield; two great-grandsons, Damian Jackson Jr., of Akron and Xavier Jordan, of Columbus; a host of nieces, nephews, relatives and friends. She was preceded in death by her husband, Robert L. Jackson; daughter, Gleneda Jackson; three brothers, Roosevelt Ramey, Ermon Ramey, and Walter Ramey; two sisters, Mildred Ramey and Vera Wernicke. The services will be held Monday, March 3, 2014, at 11 am, with one hour prior calling to the services at Small’s Funeral Services, 326 Park Avenue West, Mansfield, Ohio 44906, with Elder Linda Russell officiating. The burial will follow at Mansfield Cemetery. The family will be receiving relatives and friends at the daughter home at 234 Rae Ave., until the day of the services. The family has entrusted Small’s Funeral Services with the arrangements.

The family of Era Jackson created this Life Tributes page to make it easy to share your memories.

Send flowers to the Jackson family.