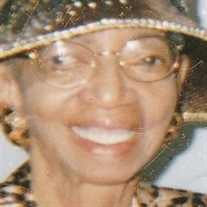 Mansfield – Ella Bell McCruter, 85, passed away Tuesday, September 23, 2014, at Ohio Health MedCentral Mansfield after an extended illness. Ella Bell MCCruter was born, July 4, 1929, to the late Roland and Ella Harrison-Williams in Demopolis, Alabama. Ella was a graduate of U.S. Jones High School in Demopolis Alabama. She moved to Mansfield, Ohio at the age of 18 with her husband Willie McCruter. Ella joined the Greater St. John's Church of God in Christ under the leadership of the late Elder J .D. Ward and continued her membership under the late Bishop Walter Jordan I, and Dr. Walter Jordan, II. Ella's nurturing spirit was shown by her love and compassion for the children at her church and the community and most called her "Auntie Ella Bell". Her hobbies were cooking and sewing for family and friends. Ella established a career as a nurse's aide at Mansfield General Hospital and Mansfield Memorial Homes where she retired after over 30 years of service. Upon her retirement she reentered the workforce as a cashier at Ride Aide Pharmacy. Ella leaves to cherish in her memory her loving husband, Willie L. McCruter, of 66 years of marriage, of Mansfield; four daughters, Gwen (James) Alexander, Rita Jones, Bonnie (Bishop William Morris) Morris, all of Mansfield, and Ketha Nash, of Columbus; four sisters, Lucretia McCruter, Anna L. Russell, Clara Cochran, all of Mansfield, and Rebecca (Leon) Russell, Cleveland; four grandchildren, Demont Jefferson, San Bernardino, CA, Heather (Jason) Petty, of Mansfield, Chantee (Sherman) Wilson, Ft Wayne, IN, and Jessica Alexander, of Mansfield; great-grandchildren, Diego Jefferson, San Bernardino, CA, and Nicholas Wilson, Ft Wayne, IN. She was preceded in death by, brothers, Roland Williams Jr., Fred Williams, James Williams, Calvin Williams, Tom Williams, and Henry Williams; sister, Lucy Hood. The services will be held Monday, September 29, 2014, 11 a.m., with the calling hours one hour prior to the services at Oasis of Love, 190 Chester Ave., with Dr. Walter E. Jordan II Officiating. The burial will follow at Mansfield Cemetery. The family will be receiving relatives and friends at the home of the daughter, Bonnie Morris, 2370 Satinwood Dr., Mansfield, from 5 to 8 daily, until the day of the services. The family has entrusted Small’s Funeral Services with the arrangements.

The family of Ella Bell McCruter created this Life Tributes page to make it easy to share your memories.

Send flowers to the McCruter family.