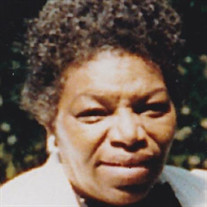 Columbus: Cozie Lee Lindsay-Floyd, 89, passed away Friday, October 14, 2016, at Whetstone Care Center, Columbus, after an extended illness. Cozie was born April 1, 1927, in Mansfield to the late Aaron Lindsay and Gertrude Burts. She made Columbus her home for the past 54 years. She was a graduate of Mansfield Senior High. She was an amazing fashion designer, seamstress, avid crocheted, lover of African violets and loved to travel to Germany. She was a lifelong member of NAFAD and traveled extensively to convention held throughout United State. She won a trophy from the organization for one of her unique creation. At an earlier age she as an avid photographer and captured many memories of her numerous nieces and nephews. She retired from the government (DSCC) after 30 years of service. She leaves to cherish in her memory a host of nieces and nephews. She was preceded in death by her parents; ex-husband, Dave Floyd; brothers, Howard, James Ivan, Chester and Cleo Burt Lindsay; sisters, Irene Kent and Carrie Majors. The family will be receiving family and friends at home of the niece Louise A. Windham, 1618 Pear Pl., Mansfield, daily from 6-8 p.m., until the day of the services. The services will be held Saturday, October 22, 2016, at 11 a.m., with one-hour prior calling at Mt. Calvary Baptist Church, 343 N. Main St., with Rev. John Bessick officiating. The burial will be held Monday, October, 24, 2016, at Mansfield Cemetery at 10 a.m. The family has entrusted Small’s Funeral Services with the arrangements.

The family of Cozie L. Lindsay- Floyd created this Life Tributes page to make it easy to share your memories.

Send flowers to the Lindsay family.