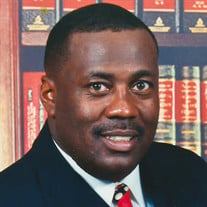 Mansfield - Charles Scott, 58, went home to be with the Lord, Tuesday, March 1, 2016, after an extended illness. Charles was born May 2, 1957, in Mansfield, OH, to the late Albert and Estella Lee- Scott. Charles was a lifelong resident of Mansfield. He was a member of the 1976 graduating class of Mansfield Senior High School and earned his B.S. at Wilberforce University in 2006. He proudly served 21 years in the United States Army, including serving in Desert Storm. He retired from the military in 1997. Charles also retired as a Captain after 21 years of service at M.A.N.C.I (Mansfield Correctional Institution). He was an active member of Latter Rain Church of God in Christ and loved the Lord with his whole heart. He was an avid sports fan who enjoyed the outdoors and adored the time he spent with his family and friends. A kind hearted man, he touched many lives and never met a stranger. He left an unforgettable mark on all who knew him and he will be dearly missed by his family. Charles leaves to cherish his memory, his wife of 38 years, Stephanie Leech-Scott; of Mansfield; two sons, Charles Scott Jr. of Philadelphia, PA. and James Scott of Atlanta, GA; one brother, Dr. Albert (Sabrina) Scott, of Atlanta, GA; four sisters, Sherlan (Rick) Carpenter, Dorothy (Johnny) Hardin, both of Columbus, OH, Rosemary (Darrin) Marsh and Ruth-Ann Fuller of Mansfield, OH; five God children A’Rhaya, Jaxcyn, Carmen, Jazmine, and Nia; a host of nieces, nephews, cousins, relatives and friends. Preceded in death by his parents. Calling hours will be held on Sunday, March 6, 2016 from 6:00 pm-8:00 pm at the Latter Rain Church of God in Christ, 259 Glessner Ave., Mansfield, OH. Funeral services will be held on Monday, March 7, 2016, at 11:00 am, at Latter Rain. Friends may call one hour prior to the services, Superintendent Louis Blevins, Jr. will be officiating and military honors will be conducted by the Richland County Veterans Burial Squad. The interment will follow at the Mansfield Cemetery. The family will be receiving guests at the Scott’s residence at 1372 Bonnie Drive, Mansfield, OH, Friday and Saturday from 2 pm-6 pm. The family has entrusted Small’s Funeral Services with the arrangements. www.smallsfuneralservices.org

Mansfield - Charles Scott, 58, went home to be with the Lord, Tuesday, March 1, 2016, after an extended illness. Charles was born May 2, 1957, in Mansfield, OH, to the late Albert and Estella Lee- Scott. Charles was a lifelong resident of... View Obituary & Service Information

The family of Charles Scott created this Life Tributes page to make it easy to share your memories.

Send flowers to the Scott family.