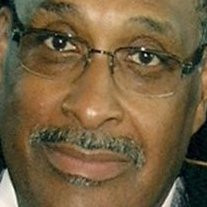 Canton – Robert “Bobby” K. Wallace Sr, 70, died Thursday, February 14, 2013, at home after an extended illness. Bobby was born February 24, 1942, in Mt. Holly, NC to the late John B and Ola Mae Wallace. He made Canton his home. Bobby was a graduate of Canton McKinley Senior High School. He served in the US Army and was a member of the American Legion. He retired from Ford Motor Company and Fisher Foods. He was former member of Pentecostal Temple COGIC and Maddox Memorial COGIC where he served as a Deacon. Lastly serving as a faithful member of Latter Rain COGIC where he also served as a Deacon. He leaves to cherish in his memory his wife, Thomasine L. Wallace, of Canton; a son, Robert (Amber) Wallace Jr, of Reynoldsburg; a daughter, Aleta (Roy) Burns, of Reynoldsburg; two brothers, Clyde Gardner and William Wallace, both of Canton; two aunts Castonia Wallace, of Canton and Lucille Wilson, of Mt. Holly, NC; special sister, Ella Johnson and children, of Cincinnati; six grandchildren, Robert III (Trey), Ciara, Caya, Dorrian Wallace and Ashley, Amaria Burns, all of Reynoldsburg; seven sister-in-laws, six brother-in-laws, a host nieces, nephews, cousins, and friends. The services will be held on Saturday, February 23, 2013, at 11 a.m. with one hour prior calling at Pentecostal Temple Church of God In Christ, 718 Henrietta Ave NE, Canton, Ohio 44704, with Rev. Louis Blevins officiating. The burial will follow at Evergreen Memorial Gardens, Louisville, Ohio. Special thanks to Mercy Medical Hospice. The family has entrusted Small’s Funeral Services with the arrangements.

The family of Bobby K. Wallace created this Life Tributes page to make it easy to share your memories.

Send flowers to the Wallace family.