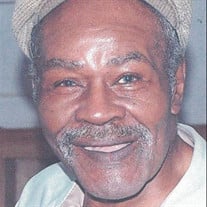 Mansfield: Augustus Butler, 78, passed away Monday, October 22, 2018, at Dayspring Assisted Living Care Facility after an extended illness. Gus was born March 28, 1940, in Bolivar County Mississippi, to the late Ed Butler Sr. and Annie (Twyman) Butler. He moved to Mansfield, in 1957, when he was sent for by his brother Ed Butler. Gus worked at the car wash on 3rd Street, before being hired by the City of Mansfield in the Sanitation Dept.; and retiring from General Motor’s in 1980. Gus loved his family and enjoyed shooting pool, he was known as “English Dan” for his pool expertise. He leaves to cherish in his memory two sons, Jimmy (Cheeks) Butler, of Mansfield and Freddie Sam Butler, of Columbus; nine grandchildren; a sister, Lula Mae Twyman; a special nephew, Terone Butler, of El Cajon, CA; a host of nieces, nephews, relatives and friends. He was preceded in death by his parents; sisters, Lueffa Danzy, Annie Mae Conley, Bennie Hawkins, Sarah Sharp, Cora Mae Johnson and Viola Butler; Brothers, Timothy (Bo) Young, Ed (Precious) Butler Jr., Richard (Honey) Butler and Robert H. Butler and Eddie Billard. The services will be held Tuesday, October 30, 2018, at 11 a.m., with one-hour prior calling at Small’s Funeral Services, 326 Park Ave West, with Elder Roy Thomas officiating. The burial will follow at Mansfield Cemetery. A special thanks goes out to Dayspring Assisting Living Care Facility for all the support they provided. The family has entrusted Small’s Funeral Services with the arrangements.

The family of Augustus Butler created this Life Tributes page to make it easy to share your memories.

Send flowers to the Butler family.