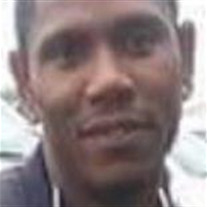 Antwoine Decario Windham, 35, departed this life unexpectedly, on Wednesday, June 19, 2019, after suffering from a short illness. “Twoine” as he was fondly known, was born on Sunday January 8, 1984 to the late Roseann Windham and Samuel Bailey of Austin, Tx. Antwoine attended Mansfield Senior High School, where he later received his GED. He was a beloved former employee of Applebee’s Bar Grill and StarTek. He was recently employed as a contractor for AK Steel, which he loved. Antwoine was devoted to his family. He was known for his infectious laughter, funny catchphrases, his love for conversation and ability to light up the room. He loved traveling, music, dancing, singing, WWE wrestling, spending time with his nieces, nephew and is overall love for children. His love for travel led him to Florida, where he lived for several years until recently returning to the Mansfield Community. Antwoine is survived by his two sisters, Carmela Bailey and Tyronza Brown; nephew, Lea’vion Tucker; three nieces, Za’Kayla Tucker, Rayna Smith and Raya Smith, all of Mansfield, Ohio. Antwoine was preceded in death by his mother; grandparents, Henry Lee and Annie Windham. The services will be held Saturday, June 29, 2019, at 11 am, with one-hour prior calling to the services at Small’s Funeral Services, 326 Park Avenue West, with Rev. Patricia Sullivan officiating. The committal services will follow the services. The family has entrusted Small’s Funeral Service with the arrangements.

Antwoine Decario Windham, 35, departed this life unexpectedly, on Wednesday, June 19, 2019, after suffering from a short illness. &#8220;Twoine&#8221; as he was fondly known, was born on Sunday January 8, 1984 to the late Roseann Windham and... View Obituary & Service Information

The family of Antwoine Decario Windham created this Life Tributes page to make it easy to share your memories.

Send flowers to the Windham family.