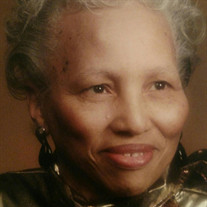 Falls Church, VA; Annie Plue Mack, 87, passed away Thursday, December 24, 2015, at Inova Fairfax Hospital, Falls Church, VA after an extended illness. Annie was born May 14, 1928, in Greenville, SC to the late Sam Scott and Goldie Vance-Cannada, moving to Mansfield, Ohio in June 1945 with her Step-father, Mother and younger siblings. Many years ago, Annie united with St John COGIC where she accepted Christ as her personal Savior under the leadership of the late Elder J. E. Ward and later served under the succession of Elder Walter E. Jordan Sr. at Greater St John COGIC, now the Oasis of Love. She loved the Lord and she loved her church and found great joy in service to others. Annie had a glow about her that would light up any room she would walk into and a smile that would never stop; you couldn’t help but to love her! She worked at the American Red Cross and The Holiday Inn for many of years. Annie and Nathaniel Mack II were married May 23rd, 1946 and divorced January 4th, 1974, and from this union three children were born. Annie leaves to cherish in her memory a daughter, Gayla (Mitch) Austin, of Petersburg, VA; two sons, Nathaniel (Lena) Mack III, of Alexandria, VA and Daniel Felix Mack, of Dumfries, VA; a brother, Calvin Cannada, of Mansfield; sister, Ann (Leon) Jefferson, of Mansfield; sister-in-law, Julia Scott, of Mansfield; two special nieces, Brenda Scott and Cheryl (Elder O’Bryant) O’Bryant, both of Mansfield; goddaughter, Simona Foster, of Woodbridge, VA; Annie nurse Evelyn (Reggie) McCurdy, Woodbridge; 8 grandchildren and 17 great-grandchildren; a host of relatives and friends. Annie was preceded in death by her parents; step-father, Herbert Cannada; a sister, Conuse Alice Haley; six brothers, Henry, Ulysses, Philemon, Roosevelt, Frank Scott, and Herbert Cannada; sister-in-law, Ruth Juan Cannada. The services will be held January 2, 2016, at 9 a.m., with one hour prior calling at The Oasis of Love, 190 Chester Ave., with Dr. Walter E. Jordan II officiating. The burial will follow at Mansfield Cemetery. The family has entrusted Small’s Funeral Services with the arrangements. www.smallsfuneralservices.org

The family of Annie Plue Mack created this Life Tributes page to make it easy to share your memories.

Send flowers to the Mack family.