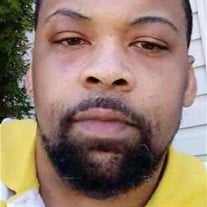 Mansfield: Andre Donell (Boobie) Westerfield, 42, passed away Wednesday, November 15, 2017, Riverside Methodist Hospital, after an extended Illness. Andre was born August 27, 1975, in Mansfield, Ohio, to the late Ralph F. Westerfield, Sr. and Johnnie (Hudgens) Westerfield. He graduated from Mansfield Senior High School in 1994 and worked at Applebee’s for several years as a cook. Andre was a great family man and a loving husband. He married Monique (Williams) Westerfield on October 2, 2013. He leaves to cherish in his memory, his wife, Monique Westerfield, of Mansfield; his mother, Johnnie (Hudgens) Westerfield; two sisters, Marie Hudgens and Stephanie Westerfield, of Mansfield; a brother, Ralph (Amanda) Westerfield, Jr., of Galion, a special nephew JeVar Hudgens; a special great niece Bre’Ale Harvey; a host of nieces, nephews, relatives, and friends. He was preceded in death by his father, Ralph Westerfield, Sr.; sister, Regina K Westerfield; nephew, Ralph Westerfield, III; and grandparents. The services will be held Friday, November 24, 2017, 11 am, with one-hour prior to the services at Small’s Funeral Services, 326 Park Ave. W., with Rev. Aaron Williams officiating. The committal services will follow. In lieu of flowers contributions can be made to Small’s Funeral Services. The Family will be receiving relatives and friends at their home, 330 Home Ave., daily from 3-7 p.m., until the day of the services. The family has entrusted Small’s Funeral Services with the arrangements.

The family of Andre Donell Westerfield created this Life Tributes page to make it easy to share your memories.

Send flowers to the Westerfield family.