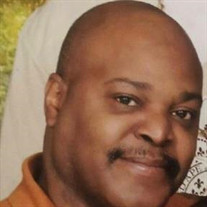 Mansfield: Andre D. Thomas, 54, passed away Tuesday, February 19, 2019, at OhioHealth Mansfield Hospital after an extended illness. Andre was born January 15, 1965, in Chicago, IL, to the late Lewis Thomas Sr. and Christine Winfield-Thomas. Andre moved to Mansfield with his mother and brothers. He lived in Mansfield for the past 41 years. Andre was a broiler grill artist where he worked at the Logan’s Roadhouse and TGI Fridays. Where he was a trainer and made some of the best steaks you could imagine and enjoyed cooking. Andre loved his family and friends; had a heart of gold. Before his sickness Andre was avid flipping gymnast. He enjoyed watching the Cleveland Browns. Andre leaves to cherish in his memory his wife of thirty-five years, Kimberley Daniels-Thomas; a son, Brandon (Taquana) Daniels; daughter, Brianna Thomas; three brothers, Lewis-June (Theresa) Thomas Jr., of Norwalk, Ohio, William-Tripp (Sheila) Thomas, of Chicago, IL. And Rashawn (Shawn) Thomas, of Mansfield, Ohio; grandchildren, Bre’ashia and Ta’Braya Daniels, a special father-in-law, Dewitt Daniels; a brother-in-law, Michael (Terri) Daniels; sisters-in-law, Zephra (John) Selmon and Stefanie (Baba) James-Caldwell. He is preceded in death by his parents; grandmothers, Beatrice Winfield and Polly Mason. The family of Andre Thomas would like to thank the nurses of OhioHealth Mansfield, The Team of TGI Fridays, special cousins, Beverly Schaffer, of Mansfield, Ohio, and Sophia Parker, of Chicago, IL. The family will be receiving relatives and friends at 619 Harter Ave., from 4 – 8, until the day of the services. The services will be held Monday, February 25, 2019, at 11 am, with one-hour prior calling to the services at Small’s funeral Services, 326 Park Ave. W. with Roy Thomas officiating. The committal services will follow the services. The family has entrusted Small’s Funeral Services with the arrangements.

The family of Andre D. Thomas created this Life Tributes page to make it easy to share your memories.

Send flowers to the Thomas family.